Available at your favourite eBook store

A summary of Matthew Boulton and James Watt: Empowering the World, a paper delivered by Roger Williams at the Matthew Boulton bicentenary conference can be read on-line.

Other books by
Roger Williams

The night the old world died 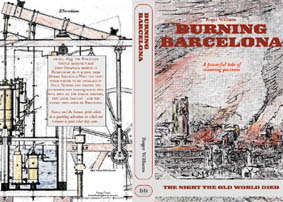 “Clockwork and steam.” Salvador turned the key,
careful not to wind the mechanism too tightly.
“Wind it fully and all the energy put into it will be
released in purposeful work.”
He set the toy sea-lion on the table and they watched
as its flippers flapped and the red ball spun on its nose.
“Energy from heat, on the other hand, is impossible
to control. It tries to burst out everywhere.
It has to be guided, directed and restrained before it
can be put to any good use.
Clockwork and steam – it is the difference between
the army and the mob.”
Spring, 1834: the Barcelona textile manufacturer Josep Bonaplata arrives in Birmingham to purchase from Messrs Boulton & Watt the first steam engine to be installed in Spain. Nobody can foresee the extraordinary consequences this will have on the engine erector, two local families – and the entire population of Barcelona

Science and the human spirit collide in a sparkling adventure in which not everyone is quite what they seem...